The Cartoons of Feng Zikai and Ogawa Usen 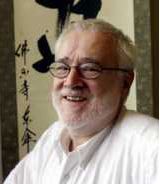 This talk will compare the work of the founding master of the Chinese lyrical cartoon Feng Zikai with some works by the Japanese artist Ogama Usen (1868-1938) whose work Feng Zikai must have been familiar with during his time in Japan.

Christoph Harbsmeier is a Professor of Chinese in the University of Oslo, currently Vigeland Visiting Professor in the University of Chicago, and attached to half a dozen leading Mainland Chinese universities as an adjunct professor. His books include Socialist Realism with a Buddhist Face: The Cartoonist Feng Zikai (1984) which has been published in two translations into Chinese, and also Language and Logic (1998) (=vol. 7.3 of Joseph Needham’s Sciene and Civilisation in China). Since 1973, Professor Harbsmeier has collected and studied Chinese cartoons and early Chinese comic strips.

Co-sponsored with the UCLA Center for Chinese Studies