Skip to main content
Home » News » Colloquium – Mt. Togakushi and the Case of the Nine-Headed Dragon

Colloquium – Mt. Togakushi and the Case of the Nine-Headed Dragon 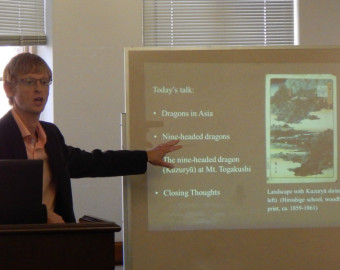 The worship of mountains has long been central to religious thought and practice in Japan, yet little attention has been paid as to how certain mountains on the archipelago came to be perceived as numinous sites. What inspired this designation and what cultural elements guided their formation into centers of social, economic, and spiritual power?

For the Winter 2015 ALC Colloquium, Adjunct Assistant Professor Caleb Carter discussed these issues through the example of a nine-headed dragon believed to reside at Mt. Togakushi (located in present-day Nagano Prefecture). By tracing a story about this dragon from Tang period Tiantai Buddhist texts to medieval origin myths at Togakushi and other sites in Japan, he demonstrated how the transmission and adaptation of a simple narrative could generate the existence of a local deity and surrounding cult. Once created, the nine-headed dragon came to be portrayed as a living embodiment of the mountain, itself, ultimately providing the bedrock for Togakushi’s transformation from a remote peak on the periphery into one of Japan’s preeminent sacred sites.