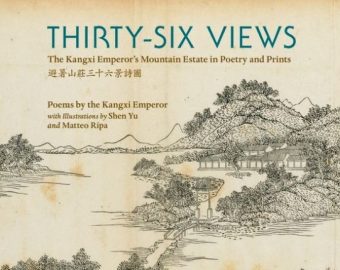 The Department of Asian Languages & Cultures would like to congratulate Richard E. Strassberg, Emeritus Professor of Chinese, on the awarding of the The John Brinckerhoff Jackson Book Prize from the Foundation for Landscape Studies.  Dr. Strassberg’s book Thirty Six Views: The Kangxi Emperor’s Mountain Estate in Poetry and Prints (Harvard Press, 2016) translates the Kangxi emperor’s Imperial Poems on the Mountain Estate for Escaping the Heat (Yuzhi Bishu shanzhuang shi) to commemorate his recently completed summer palace. Through the Emperor’s perceptions of thirty-six of its most scenic views, his poems and descriptions present an unusually intimate self-portrait of the emperor at the age of sixty that reflected the pleasures of his life there as well as his ideals as the ruler of the Qing Empire. Introduction of the book by Stephen H. Whiteman of University of Sydney.

The John Brinckerhoff Jackson Book Prize is named in honor of one of the founding figures of American landscape studies, the J. B. Jackson prize is awarded to a distinguished book published in the English language within the past three years. The purpose of this prize is to reward contributors to the intellectual vitality of garden history and landscape studies.

The Foundation for Landscape Studies, a New York not-for-profit corporation, The activities of the foundation are governed by a board of directors and implemented under the leadership of its president, Elizabeth Barlow Rogers.The foundation initiates collaborative projects with other organizations, institutions, and individuals that promote and advance landscape history and historic landscape design, theory and practice. Through these associations and independent activities, it serves as a center of communication and collaboration.