Li Min’s book, Social Memory and State Formation in Early China, is released by the Cambridge University Press in summer 2018. In this book, Li Min proposes a new paradigm for the foundation and emergence of the classical tradition in early China, from the late Neolithic through the Zhou period. Using a wide range of historical and archaeological data, he explains the development of ritual authority and particular concepts of kingship over time in relation to social memory. His volume weaves together the major benchmarks in the emergence of the classical tradition, particularly how legacies of prehistoric interregional interactions, state formation, urban florescence and collapse during the late third and the second millenniums BCE laid the critical foundation for the Sandai notion of history among Zhou elite. Moreover, the literary-historical accounts of the legendary Xia Dynasty in early China reveal a cultural construction involving social memories of the past and subsequent political elaborations in various phases of history. This volume enables a new understanding on the long-term processes that enabled a classical civilization in China to take shape.

He attempts – as far as I know, for the first time – to situate different traditions of historical memory within specific regions of protohistoric China, and he is able to show how they encapsulate regionally different models of, or trajectories toward, kingship and state- level government that can in turn be independently traced in the archaeological record. This reflective turn places the book at the very cutting edge of both the archaeological and the historical disciplines. More broadly speaking, Li Min contributes in a highly original manner to the current debate about memory among scholars across the humanities and the social sciences. Lothar von Falkenhausen, University of California, Los Angeles

‘Taking as his leitmotif the cultural evolution of the tripod from humble cooking vessel to preeminent symbol of kingship, Professor Li skillfully extracts from a vast accumulation of archaeological data the material evidence required to magisterially narrate the emergence of China’s early civilizations. Professor Li elevated the level of discourse significantly by taking a sophisticated social archaeological approach to the question of the ‘Xia’. Professor Li convincingly shows how, far from being a late fiction, the ‘Xia’ corresponded to a culturally constructed constellation of political concepts, institutions, and ‘social memories of different episodes of state building from the Longshan and Erlitou periods’. It was this composite of elements, notionally the ‘Xia’, which constituted the conceptual framework that co-evolved with the archaic kingship during the Zhou Dynasty. This is a perspective that could only emerge from a thorough mastery of the social, resource, and landscape archaeology of the period, informed by a sound theoretical approach to the material.’ David W. Pankenier, Lehigh University, Pennsylvania

‘Professor Li’s monograph is a direct and canny intervention in the central debate in the archaeology of pre-imperial China, that is, the debate over the relationship between canonical literary-historical accounts of early polities and archaeological evidence for the extent and nature of these polities. The brilliance of Professor Li’s approach is that it situates the emergence of accounts of the past (including those literary-historical accounts) in a richly detailed presentation of cultural exchange, urban development and decline, and population movement in the millennia before the emergence of writing … the book will be greeted as a major achievement, both for its confident control of the sources and for its rigorous theoretical approach to the problem of cultural memory-formation.’ David Schaberg, University of California, Los Angeles

‘This book opens a new window to the study of ancient Chinese history. The topic of this book is unique. It does not follow any traditional interpretations in Chinese archaeology, but a combination of processual and post-processual archaeological approaches with new integration of ancient textual records. It addresses a set of questions relating to the origins of Chinese civilization and the rise of dynastic states. These questions have been the central concerns in scholarly discourse, and long been intensively debated. This book takes a new angle to tackle some of the issues, using the latest archaeological findings, anthropological theories, traditional textural information, and analogy with other civilizations in other parts of the world.’ Liu Li, Stanford University, California

‘In part, the argument boils down to what the nature of the ‘Xia’ dynasty that sites at the fount of the ‘Three Dynasties’ that define the origins of Chinese civilization, and how the received historical narrative about the Xia developed. He presented this narrative as a palimpsest that involved the accretion of influences from different eras and places. In contrast to arguments that attribute most of the significant components of the Xia narrative to the late first millennium, he argues that certain aspects of the notion of an origin must have a considerably earlier provenance, in particular connecting to two different aspects of the late third and early second millennium BC, both of which can be explored archaeologically.’ Rowan Flad, Harvard University, Massachusetts

‘This book provides a long-awaited archaeological perspective on the genealogy of knowledge in spatial, temporal, technological, and formal representations involved in the Wen Ding narrative as a historical palimpsest. It is an especially challenging one that few scholars would take on. The approach is uniquely creative resulting in intriguing interpretations about historical and archaeological data from the late Neolithic to the Zhou periods. It is a cutting edge and, in many ways, bold and innovative study that will quickly take its place as a seminal contribution, not only for the history, archaeology, and anthropology of China, but much more broadly in both the social sciences and in the humanities.’ John Papadopoulos, University of California, Los Angeles. 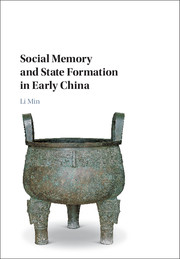