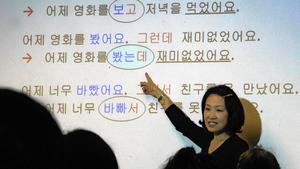 According to a recent national study, enrollment in Korean language courses at U.S. colleges and universities showed the largest percentage growth of any foreign language. The Modern Language Assn. reported that Korean language enrollment rose 45% from 2009 to 2013. Overall, language studies declined by 6.7% during that same period, and interest dropped in many popular ones, including Spanish, French and German [ Read More ]