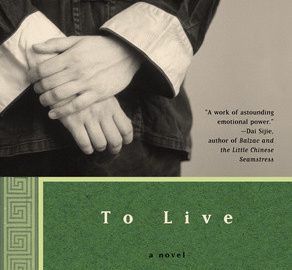 The Department of Asian Languages & Cultures is pleased to announce that faculty member Michael Berry’s translation of the novel To Live has been selected for the National Endowment for the Arts’ (NEA) prestigious The Big Read initiative. The Big Read is a national program that offers grants to support organizations in developing community-wide programs which encourage reading and participation by diverse audiences. They have a select list of books that are included in the list of titles to be supported, which in the past has included classics like Fahrenheit 451 and The Great Gatsby, and The Call of the Wild. This summer NEA revamped the program with a new list of 28 titles. While the list was previously limited to works written in the English language, this year The Big Read included two books of literary translation, including To Live by award-winning Chinese author Yu Hua.

Generally regarded as a classic of contemporary Chinese fiction, To Live is an epic novel that spans more than four decades of modern Chinese history as it traces the story of Fugui and his family. The novel has been translated into numerous languages and been awarded multiple honors, including the Grinzane Vavour Prize (1998) and the Ordre des Arts et des Lettres (2004). In 1994 acclaimed director Zhang Yimou released a film adaptation that was recognized with the Best Actor and Grand Prix prize at the 1994 Cannes Film Festival. Michael Berry’s translation of To Live was first published by Anchor Books in 2003 and has been adopted widely for high school and college courses.

Please see the NEA Big Read website for a podcast interview with Professor Michael Berry. Apply for a Big Read program in your community.