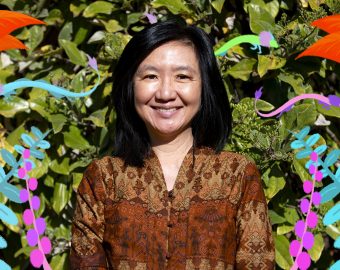 Asian languages and cultures lecturer Juliana Wijaya worked as a linguist for Disney’s “Raya and the Last Dragon.” As a member of the Southeast Asia Story Trust, Wijaya reviewed character names to ensure accurate language representation in the film. (Photo by Anya Yakimenko/Daily Bruin. Photo illustration by Megan Fu/Daily Bruin)

From cultural nuances to character naming, accurate representation is a team effort.

For Disney’s “Raya and the Last Dragon,” this team was the Southeast Asia Story Trust. Consisting of cultural consultants, textile experts, architects and linguists, the story trust worked to ensure that the film, which is nominated for an Academy Award in the best animated feature category, accurately represented Southeast Asian culture. Asian languages and cultures lecturer Juliana Wijaya worked as a linguist within the trust, consulting on the character names. She also helped with pronunciation details and determining if the names linguistically sound Southeast Asian or have significance in a particular Southeast Asian language, Wijaya said.

“For the story trust, it was only me (working as a linguist),” Wijaya said. “(Disney has) their own linguist team who worked on creating all the expressions, … the names of the characters and some phrases that they made up that would sound Southeast Asian to start off. They would give me the phrases that they created, the names of the characters, and I would review them and … help them choose which one would be the best.”

“(‘Raya and the Last Dragon’) is supposed to be a Southeast Asian-inspired animation – it’s not an animation about Southeast Asia,” Wijaya said. “You can associate (the names), but you should not be able to pinpoint or say this person is exactly Thai or something very specific like that. The names themselves … represent and sound Southeast Asian.”

During the character naming process, Wijaya methodically went through all the possible meanings of the names to ensure the names represented what each character was intended to express, she said. For the titular character of Raya, “raya” is the root word for “to celebrate” or “festive”as well as “grand” in Indonesian, identifying Raya’s strong character as someone who is meant to be celebrated and can bring harmony, she said.

Some character names, such as the monkey-like creatures called Ongis, were made up to sound broadly Southeast Asian but with no meaning in any particular Southeast Asian language, Wijaya said. For the dragon Sisudatu, mostly referred to as Sisu in the film, the “sisu” part of the name is more decorative, she said, but “datu” is meant to function as an honorific in several Southeast Asian countries.

To ensure accuracy in the voiceovers, Wijaya made recordings on how to properly pronounce the names, she said. Since there are many Southeast Asian languages with different tones and pronunciations, she also needed to ensure that the words from one language did not have a negative or inappropriate meaning in a different language, she said.

Beyond character names, the creators tried to depict the nuances of Southeast Asian culture, said Dewa Ayu Larassanti, a fourth-year world arts and cultures student and member of the story trust. This included details such as how the characters both gave and received items using their right hands or how they held certain items. For instance, Raya holds the dragon gem in her right hand and sword in the left since the gem is more sacred, Larassanti said. Larassanti added the ultimate goal was for these actions to go unnoticed by a Southeast Asian audience because such customs would be the norm for them.

With regard to highlighting culture, Wijaya said although Southeast Asia is extremely diverse, “Raya and the Last Dragon” functions as a starting point for younger generations to see themselves in forms of media. Larassanti said she hopes children, especially immigrants of Southeast Asian descent, who watch the film can see the beauty of their heritage and learn to be proud of their culture from a young age.

“Raya and the Last Dragon” has opened up the opportunity for audiences who may have previously been unaware to acknowledge and learn about Southeast Asian people and culture, Susilo said. After the film’s release, she has begun to see casting directors seeking Southeast Asians for roles more often, she said. In the future, she hopes mainstream media continues to head in the direction of producers, creators and directors pouring more effort into proper cultural representation, she added.

“Representation is absolutely crucial, especially for brown and Black people,” Larassanti said. “It shows the beauty of our cultures and the fact that we are highlighted as people. We are special, we have stories, and we are important. But if we can get people to understand that as young as possible, that’s really special. When little Southeast Asian kids can walk around and be like, ‘Oh my god, I look like Raya,’ that’s so important.”

Article written by Amelie Lobo from the UCLA Daily Bruin.