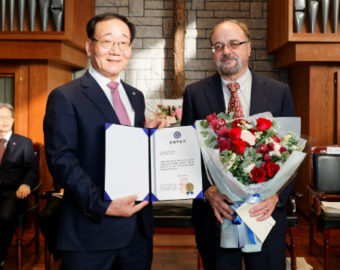 The Department of Asian Languages and Cultures would like to congratulate Professor John Duncan,  Professor of Korean in the Department of Asian Languages & Cultures, on his award as the twenty-third recipient of the Yongjae Award.The Yongjae Award was established to recognize the best Korean Studies scholars around the world through the Yongje Academic Award and the Yongjae Chair Professor. In 1995, the Yongjae Award was created to honor Yongjae Paek Nak-jun (1895-1985) on the 100th anniversary of his birth. After completing his studies at Princeton University and Yale University, Paek Nak-jun returned to Korea in 1927. He was appointed professor of Yŏnhŭi Professional School, the predecessor of Yonsei University, and served as the Minister of Education during the Korean War. Subsequently, Paek Nak-jun became the first president of Yonsei University, following the merger of Yŏnhŭi University and Severance Hospital in 1957. Paek Nak-jun also established the first research institute at Yonsei, the Institute of Eastern Studies, which is the predecessor to the current Institute of Korean Studies.

As a leading figure in Korean Studies as well as historical studies around the world, Prof. Duncan has produced impressive research results in his studies of the Chosŏn dynasty. After majoring in History at Arizona State University, John Duncan came to Korea as member of the United States military. He graduated from Korea University in 1972 before receiving his M.A. from the University of Hawaii in 1977, and his Ph.D. from the University of Washington in 1988. He has been a faculty member of the Department of Asian Languages and Cultures at UCLA since 1989, and the director of the Center for Korean Studies at UCLA since 2001. In 2000, Prof. Duncan published his authoritative study on the Koryŏ-Chosŏn transition, The Origins of the Chosŏn Dynasty (University of Washington Press). At the public ceremony for the Yongjae Award, the featured speakers included President Kim Yong-hak of Yonsei University, as well as President Yeom Jaeho of Korea University.

In his remarks upon receiving the Yongjae Award, Prof. Duncan said that he was particularly honored and humbled to receive the Yongjae Award since the first recipient of the award was his own advisor, Prof. James Palais of the University of Washington.