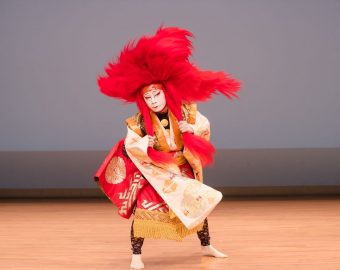 Kabuki actor Nakamura Kyozo in a performance of “Shujaku jishi” performance for UCLA students in November 2019. The event was sponsored by the Yanai Initiative and the Japanese Ministry of Culture.

UCLA has received a $25 million gift from Tadashi Yanai, the chair, president and CEO of Japan-based Fast Retailing and founder of clothing company Uniqlo. The funds will endow the Tadashi Yanai Initiative for Globalizing Japanese Humanities, which will bolster UCLA’s status as a leading center for the study of Japanese literature, language and culture.

The gift is the largest from an individual donor in the history of the UCLA College’s humanities division. A previous donation of $2.5 million from Yanai in 2014 created the Yanai Initiative, a collaboration between UCLA and Waseda University, one of Japan’s most prestigious universities. The program supports academic and cultural programming and enables student and faculty exchanges between the two universities. This latest gift will ensure the initiative’s long-term future.

“Mr. Yanai’s extraordinary gifts are a testament to UCLA’s long-standing commitment to educate global citizens who can thrive in careers — and cultures — anywhere in the world,” said UCLA Chancellor Gene Block. “The Tadashi Yanai Initiative for Globalizing Japanese Humanities will have a profound and lasting impact on this campus.”

The Yanai Initiative is housed in the UCLA College department of Asian languages and cultures and directed by Professor Michael Emmerich. The latest gift will fund and establish an endowed chair in Japanese literature and will fund conferences, public lectures, faculty research, cultural performances and community outreach. It will support graduate and postdoctoral fellowships and undergraduate awards.

“It has been inspiring to see all of the creative, innovative programming — both academic and cultural — that this project has realized over the past five years,” Yanai said. “Now that we are making it permanent, I’m excited to see how it will continue to transform the Japanese humanities in a global context. At the same time, I hope this gift will give others a chance to remember how crucial the humanities are, and, in their own way, to recommit.”

The gift also triggers matching funds from the Humanities Centennial Match and the UCLA Centennial Scholars Match to support UCLA graduate students in Japanese humanities and other areas of study.

“Mr. Yanai’s gift is a visionary investment in a field of increasing interest to humanities scholars, students and people everywhere,” said David Schaberg, UCLA’s dean of humanities. “Thanks to his generosity, UCLA will lead the way in research and teaching in Japanese humanities, bringing new attention to a rich culture that has captured people’s imaginations for centuries.”

Schaberg said another benefit of the gift is that it will deepen UCLA’s partnership with Waseda.

In addition to funding fellowships, symposia, lectures and academic workshops, Yanai’s previous donation supported a range of cultural programs, including a five-day series of events featuring actor Nomura Mansaku, who was designated a “living national treasure” by the Japanese government; a retrospective of films by Palme d’Or recipient Hirokazu Kore-eda; and “The Art of the Benshi,” which introduced Los Angeles audiences to the early 20th century performance art in which narrators bring silent movies to life with live music accompaniment.

“During the past five years, Mr. Yanai’s generosity has enabled us to do so much for students and for the Japanese humanities not just at UCLA, but across the country and around the world,” Emmerich said. “We’ve been able to organize major cultural events across Los Angeles, drawing thousands of participants. I never imagined I would be able to say that all this was only the beginning. I can’t express how grateful we all are to Mr. Yanai for his generosity, his incisive advice and his commitment.”

The gift was facilitated through a designated donations program run by the Japan Foundation, which is dedicated to promoting cultural and intellectual exchange with Japan. Over the past three decades, the foundation has helped advance and fund numerous cultural programs at UCLA.