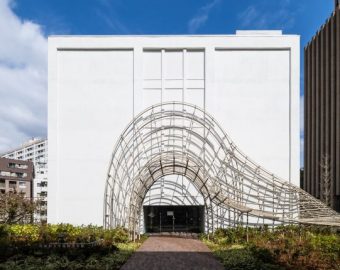 In 2013, the UCLA Department of Asian Languages and Cultures faced a troubling possibility: its entire program in Japanese literature and culture might collapse. Both its faculty members in this popular field of study were being courted by an Ivy League institution, jeopardizing its efforts to hire a third faculty member.

In the years since, however, the Japanese humanities have emerged as one of the greatest success stories in UCLA’s Division of Humanities. In 2017 and 2019, the department succeeded in recruiting two additional scholars of Japanese film and kabuki, respectively, transforming its program into one of the most robust in the nation. And early in 2020, Uniqlo founder Tadashi Yanai gave $25 million—the largest individual gift in the history of the division—to endow The Yanai Initiative for Globalizing Japanese Humanities. Since its creation in 2014, The Yanai Initiative has been directed by Michael Emmerich, that third Japanese literature specialist to join the program.

In just eight short years, Emmerich and his colleagues have catapulted UCLA’s program in the Japanese humanities to global prominence through an impressive array of Yanai Initiative projects, including more than 70 academic and cultural events that have benefited not only students and faculty, but also the broader Los Angeles community. Today, UCLA is known as a hub for research in the field, attracting hundreds of graduate students, scholars, authors and artists to campus from all around the world.

Emmerich and The Yanai Initiative recently announced their intention to build on this record and on the networks they have developed by launching Japan Past & Present, a centralized digital hub for interdisciplinary and international research in Japanese humanities.

“This will really be a game changer,” Emmerich said. “Until now, it has never been possible to conceive of the Japanese humanities as a truly global field. Ironically, I think COVID-19 has helped us see more clearly that we can create truly meaningful intellectual bridges, and build an inclusive scholarly community, online. We want to seize this moment to do that.”

Embodying a vast, truly global vision, Japan Past & Present is a collaborative project of UCLA and Waseda University in Tokyo. It will bring together wide-ranging resources to benefit and facilitate communication among scholars in the Japanese humanities based around the world. The hub will include databases of translations and scholars, research materials, event notices, and a venue for mentorship and collegial advice. Emmerich and his colleagues also hope to create a system designed to open up access to primary and secondary materials in the Japanese humanities to scholars at institutions that can’t afford a subscription to the ILL system.

“This project exemplifies UCLA’s role as a public research university in making research widely accessible, and it furthers The Yanai Initiative’s aim of strengthening the Japanese Humanities as a global field,” said David Schaberg, senior dean of the UCLA College and dean of the humanities division. “Inviting the participation of scholars of all backgrounds, and from all different countries, will stimulate new research and intellectual exchange.”

Japan: Past & Present will consist of three “collectives” focused on premodern Japan, early modern Japan, and modern and contemporary Japan—more than a thousand years of history and cultural production.

Paula R. Curtis, a postdoctoral fellow at Yale University, is leading the development of the Premodern Japan Collaborative and has been instrumental in conceptualizing the project as a whole.

“Japan Past & Present is an unprecedented effort to strengthen the ties between diverse communities of scholars from all around the world, and to make the Japanese Humanities more inclusive and equitable. It’s a daunting undertaking, but it’s also incredibly exciting,” Curtis said.

Toeda Hirokazu is co-director with Emmerich of The Yanai Initiative at Waseda and director of the Waseda International House of Literature, which will be hosting the digital hub.

“I’m delighted that The Yanai Initiative is launching this exciting project to help globalize the field of Japanese Studies, and look forward to more exciting developments as the project unfolds,” Hirokazu said.

Emmerich said the first stage of this enormous project, focused on premodern Japan, is currently underway and that he hopes to keep things moving rapidly ahead.

The Yanai Initiative, established through a major gift from Uniqlo founder Tadashi Yanai, is part of the UCLA Department of Asian Languages and Cultures and is a collaboration with Waseda University, one of Japan’s most prestigious universities. It supports academic research and cultural programming and facilitates student and faculty exchanges between the two universities.

This article was written by Margaret MacDonald.